Early on my climb up the 253 steps I had to ascend to get to the Cape Palliser lighthouse, I couldn’t help but spare a thought for the early lighthouse keepers at the Cape. You see, when the lighthouse was open in 1897, not only did they have to scramble up a muddy, 58 metre-high cliff to get to the lighthouse, but, they had to manually haul large drums of oil and kerosene up as well. This lunacy continued for the first 15 years of operation at Cape Palliser until someone had the genius idea of putting in a set of steps!

The Rimutaka Hills – Buy or view the Ōtepoti | Dunedin gallery

I stopped in Featherston and ate before I found a place called Loco. A delightful place that was not only a second hand bookshop but it was also a coffee shop. I instantly adored it. The shelves were piled with books from every genre spread out over two rooms that filled all the spaces inbetween. There were couches, sofas and chairs set out around a coffee table in the shop window while at the back of the store a more extensive reading area had been created with plenty of nooks and crannies to tuck yourself into.

It wasn’t long before I had found a copy of Truman Capote’s 1966 non-fiction novel, In Cold Blood and armed with a delicious cup of joe, I settled myself for a chapter or two.

Later, remembering I still had nearly 70 kilometres left until I got to Wellington, I pointed my car in the direction of the Rimutaka Hills, the Hutt Valley and Wellington.

The drive from Martinborough to Masterton took about 40 minutes and was uneventful. Which is just what you want to be able to say when the national road toll regularly reaches around 300 deaths per year. It rained the whole way, apart from when it was snowing and hailing. I can’t say the journey was boring, more unremarkable! Which is a good way to describe Masterton. Maybe it was the rain, hail and snow however I drove from one side of the town to the other, went around a round-about and drove out again without finding a single reason to stop. I just couldn’t find one. I really tried, I really did, however I just couldn’t for the life of me convince myself that it would add to my day or life in any conceivable way. So, leaving Masterton behind, I headed for Carterton and a coffee.

Carterton is a pleasant small town and unlike Masterton holds a bit of allure. It’s surrounded by farmland and hills that provide a lovely backdrop for the town itself. I stopped at a place called Wild Oats for coffee and drank it while rummaging through a second-hand store called Bizarre Attractions next door. A shop filled with curiosity, it had everything from records to old tin cans, toys and gardening equipment. I hunted through the vast collection of items in a world of happiness and while I didn’t find inspiring sophistication, I did find something better, joy and delight. Exiting the shop, finishing my coffee and bidding the owner Graham farewell, I took a moment to read about Carterton’s namesake Charles Rooking Carter at a nearby statue before walking back to my car.

The rain settled in once more and I became hungry. In need of lunch I made up my mind to eat in the nearby town of Featherston and that is where I headed next.

The next day I awoke feeling cold. Throughout the night the surrounding hills of the Wairarapa had been covered with a dusting of snow. I’d spent the previous evening enjoying the hospitality of the local hotel, discussing the benefits of wearing a Peak Blinder hat and the virtues of the late, great All Black Sir Brian Lochore. This then led to a much deeper discussion on if it’s still possible to make the All Blacks by playing for Wairarapa Bush without playing Super Rugby. We all agreed it wasn’t.

Yesterday, leaving Cape Palliser the weather had turned nasty pretty quickly and so I’d decided to leave having a stroll around the town of Martinborough till the next day. Now, in the brightness of a new morning with the odd hail storm passing overhead, I went for a look around.

The town very much had a ‘summer vibe’ to it. The houses all had either contemporary designs or were upgraded Villa’s with wrap-around decks to provide shade from the summer sun. There were swimming pools, vineyards and olive groves aplenty. All of which suggested that in summer if you like complicated and lavish food platters with expensive wine then this was the place to be. I came to suspect that Martinborough was a place that shutdown over winter and was just now coming out of its hibernation.

Walking in the hail I passed the now familiar hotel and passed the Old Post Office which had been converted to a Boutique shop that among other things, claimed to have Inspiring Sophistication. Not being confident about what inspiring sophistication was, I went in. It took all of about 15 seconds to decide that if what was in front of me was inspiring sophistication then clearly it was something I was lacking. What’s more, since it seemed to involve floral designs, gourmet gift presentations and stuff made with lace, it wasn’t something I’d be purchasing in this lifetime, and dare I say it, the next!

Over the next hour I wandered around the village square and the surrounding shops while rain, hail and snow showers passed by. As I was preparing to leave, I spotted two things that caught my interest. The first of which was a sign at the Wine Merchants. I stood for a moment, studying the sign to make sure I understood it properly. It appeared that you could buy wine and also hire bikes. Now, I don’t want to cause alarm, but doesn’t that seem a tad dangerous to anyone else? Secondly, I discovered that the town of Carterton was nearby. Thus it was that I made up my mind to make Carterton my next stop, after Masterton.

I arrived at what can only be described as a ‘makeshift’ parking lot. Standing in an enthusiastic wind, I steady myself for the ascent to the red and white striped Cape Palliser Lighthouse that sat on a rocky point some 60 metres above me.

To get to the Lighthouse (having first survived the drive), first you must commit yourself to climbing the 252 steps which were built in 1912. Keeping in mind that the Lighthouse was first lit in 1897, that gives 15 years that Keepers had to scramble up a dangerously slippery dirt track just to reach the Lighthouse. Once there, they still had to haul the supplies (oil and kerosene) up the cliff face to the light station by way of a hand winch.

Getting supplies to live off was just as complicated. Stores were delivered every 3 months, weather permitting. On the occasions when the seas were too rough, the stores were landed 6 kilometres away at Kawakawa Bay. This then left the Lighthouse Keeper with the dilemna of getting the stores back to his lodgings.

Standing at the Lighthouse I took a moment to take in my surroundings. It was beginning to rain. The wind was picking up and I couldn’t help but reflect that the life of a Lighthouse Keeper must have been a lonely existence. With that I departed, heading for the charm of the Martinborough Hotel. 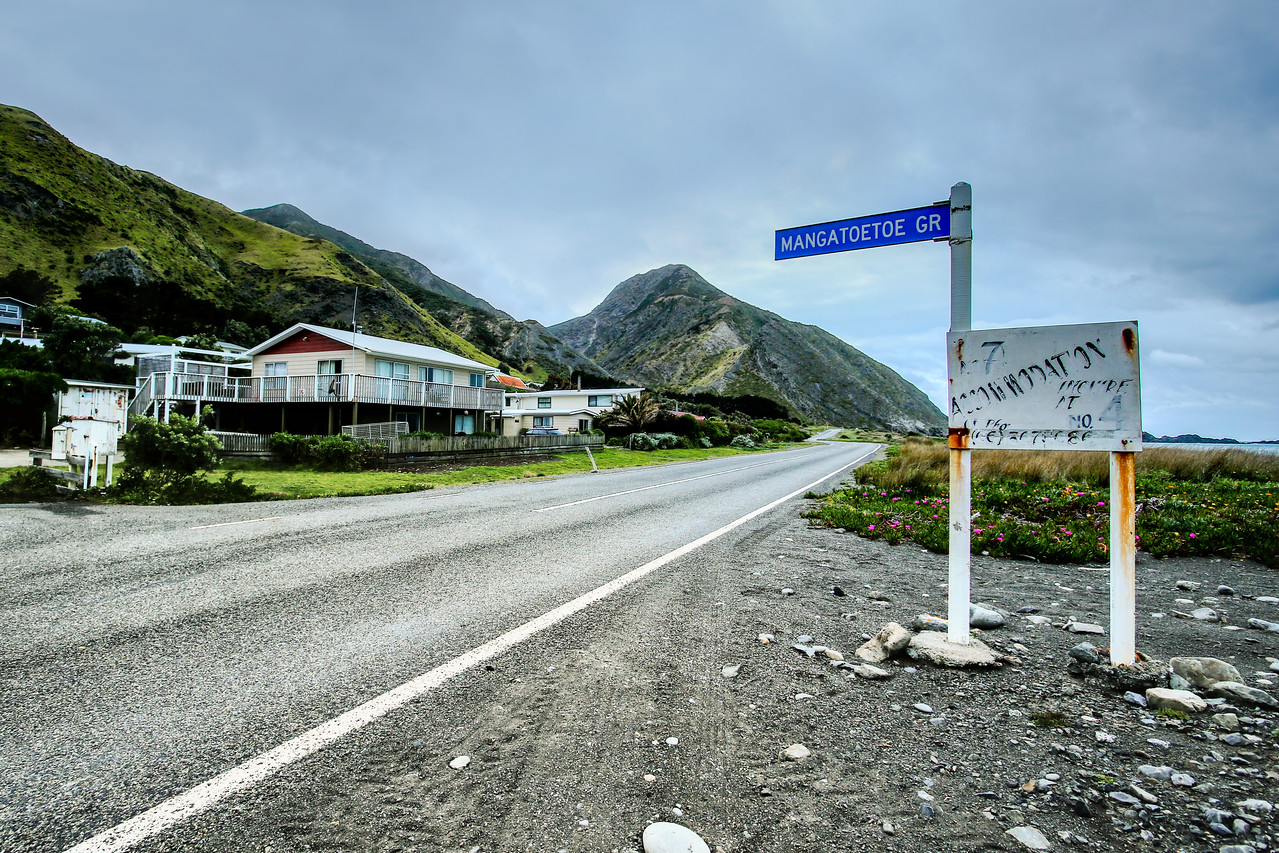 The next day, heavy, dark clouds hung overhead like a thick blanket and in the distance a wall of weather loomed ominously on the horizon. Between, patches of blue sky gave a sense of hope that there might yet be some fine weather left in the day. I hoped so, I was heading for Cape Palliser Lighthouse, the southernmost point of the North Island.

Approaching the coast which would eventually lead to the Lighthouse, the wind picked up and the countryside changed to a beach of blacksand with dramatic pinnacle cliffs. Occasionally I’d pass cribs and huts that were scattered along the road that held little or no protection from the elements. I manoeuvred past partially washed out roads and small villages that were filled with crayfish pots and fishing boats that were pushed into the sea by bulldozers. The road narrowed to a single lane, a ford had to be negotiated, fallen rocks scattered the way ahead and I lost wifi coverage. This was a place that you’d truly have to love to spend any length of time. It was  New Zealand’s rugged coastline at its very best and what’s more, it had a Lighthouse!