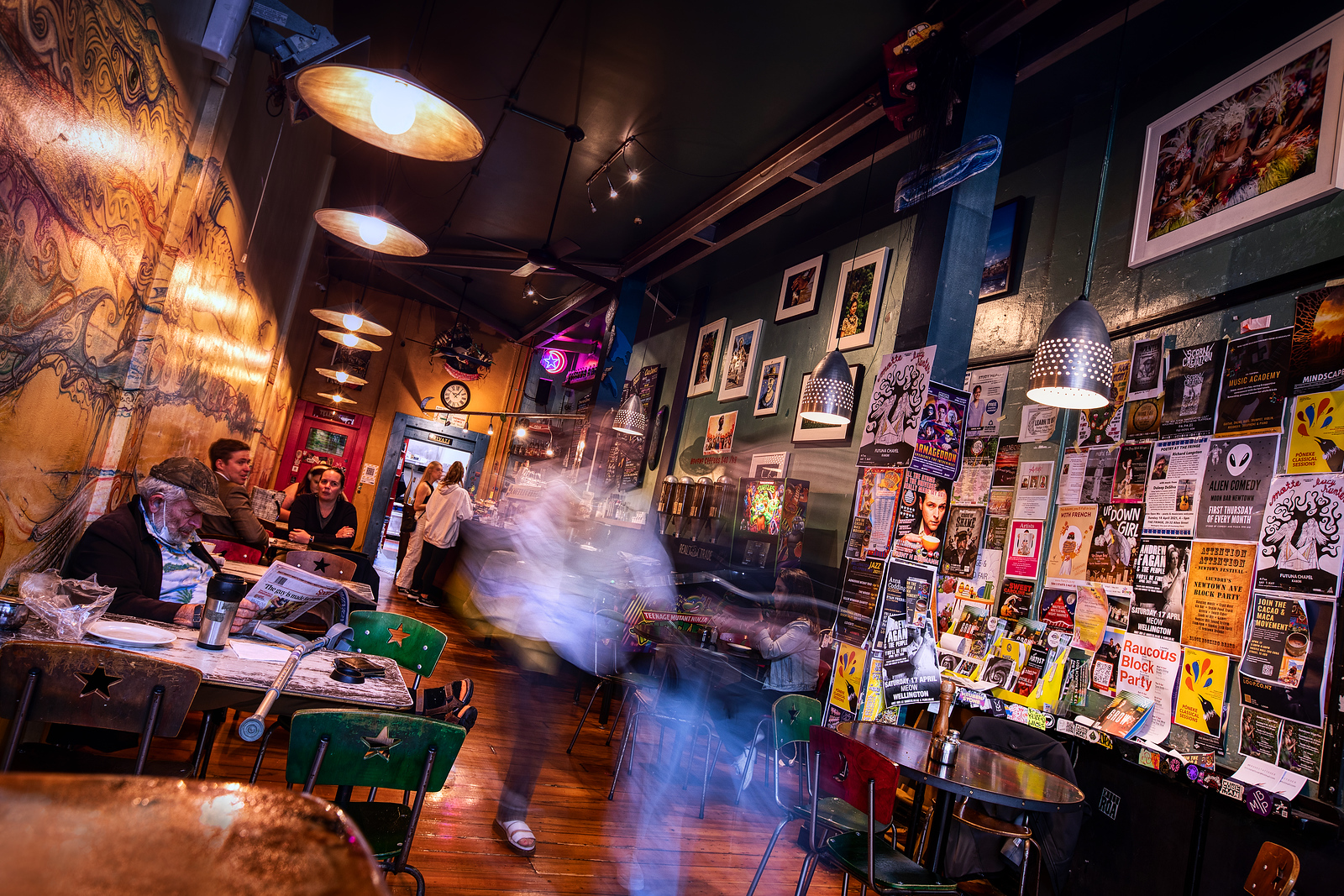 Day 2 – I awoke in the morning feeling refreshed and very well rested. The previous day I’d spent 90 minutes flying and 480 minutes at Christchurch Airport so now I was more than ready for a walk and something to eat.

I ate breakfast at a very retro place called Midnight Espresso. After ordering, I sat in the window watching rain fall and Cuba Street slowly come to life, passing the time marveling at how maple syrup instantly improves bacon and banana pancakes. When finally my stomach was full, and my plate empty, I set off into the sleepy Wellington streets.

I hadn’t walked more than a few blocks when it instantly struck me the number of places there are to eat. It’s as if residents have taken on a city wide challenge to fill every space possible with an eating establishment. There is little wonder that Wellington rivals New York for bar and restaurants per person.

I made my way from Cuba Street and along Lambton Quay. Suddenly everything was much busier. Feeling very underdressed without a shirt and tie on, it occurred to me a one point that I seemed to be one the only person to not have a lanyard around my neck. As I walked, I pondered if these lanyards had a practical use or if they were part of some fashion movement I’d missed like wearing trousers that are too short. It crossed my mind at one point to stop buy one as a way of blend in, however I began to feel dizzy under the pressure of such an important fashion decision. Besides, I had arrived at my destination, the Beehive.

The Beehive as a government building opened on the 27th February, 1977 however it’s origins date back to 1964. The birth of the Beehive came about during a dinner between then Prime Minister Keith Holyoake and British architect Sir Basil Spence who apparently used a pencil to sketch what would become known as the Beehive on the back of a napkin of all things.

Having promised my wife I wouldn’t message Prime Minister Jacinda Ardern to see if she felt like a beer, I left the pencil sketched building behind. I crossed several streets and jumped in a few puddles before arriving at the waterfront. After a few further stops I arrived at the Wellington Museum. 10 days earlier, it had been 53 Years since the passenger ferry ‘The Wahine’ had struck Barret’s Reef and sunk in a violent storm. Since I was in Wellington, I was keen to see what collection of artifacts and exhibits were on display for public viewing from such a cultural and historically significant event. The museum itself is housed in a lovely old building dating back to 1892 and while the museum is splendid, The Wahine display was sadly disappointing. All I found from a disaster that killed 53 people, and is widely known as a key moment in New Zealand’s history was a timeline, a model, a few life jackets and a looping video.

Sometime later, I exited the museum to find the rain still falling and my stomach starting to once more want food. With over 400 eating establishments to choose from, I headed off through the puddles with my stomach rumbling.

One thought on “5 Days, 4 Nights In Wellington.”