A Walk In The Badlands

I awoke to pain that left me in no doubt about the agony I was set to suffer for the rest of the day. Usually, these symptoms are associated with a pounding head, a throat feeling like sandpaper and an overwhelming feeling of dehydration. Today, things were different. The endless pain was not coming from a pulsating vein in my left temple. Nor the result of overindulging the night before, but from my calf muscles.

As it turns out, walking 10 km through the snow, in gumboots, isn’t good for the calf muscles. In fact, my legs were quite determined to not do anything at all. They protested most vigorously at the slightest movement.  Adding to my discomfort was my glowing red face which could have guided in low flying aircraft to land.

In the lodge kitchen/lounge I ate breakfast in discomfort under the watchful gaze of Aoraki/Mount Cook. As I ate, other guests appeared carrying hats and sunblock (bastards!) looking like a walking advertisement for Kathmandu or Macpac. I sheepishly finished my coffee and attempted to walk as normal as possible.

Later, feeling the worse for wear, struggling to walk, and with a burning hot face I headed for the Clay Cliffs of Omarama.

I wasn’t sure what the Clay Cliffs were, but they did have their very own sign post. This automatically signalled they must be of interest. After all, they don’t put sign posts up for nothing!

The Clay Cliffs were formed a mere 1 to 2 million years ago. According to the signage, they are a classic example of a semi-arid badlands style erosion. Whatever that means! I thought the numerous towers and pinnacles looked like upside down ice cream cones. But, putting that on a billboard probably wouldn’t entice people to pay the $5 entry fee!

It turns out they were formed by an ancient lake and river that once existed. Now, wind and rain over many thousands of years has eaten into the rock layers. This has produced the spectacular upside down ice cream cone effect.

Upon arriving, and judging by the amount of cars and campervans in the parking lot, I was going to have company. That’s the thing about visiting places in Aotearoa. You’ll either be completely alone, or arrive just as a bus load of tourists turn up. On this day, it seemed that Britz Campervans had decided to hold their AGM in this very isolated location, at this very moment, and they were kicking things off with a pep rally. Determined to beat the gathering crowd, and to be the only one to walk the track that day without a complaining child or a walking aid, I set off up the track as fast as my tired legs could take me.

I was pleasantly surprised with my efforts because upon arriving at the end of the track, I was delighted to find only one other person in the area. I quickly went to work with my camera. Just as I was finishing (some 10 minutes later) the entire canyon was filled with people. Suddenly, every possible item imaginable was off loaded from backs, taken out of packs and scattered around the canyon. Clearly the entourage was planning on being present for a while as they had taken the approach of scattering themselves and their belongings around the canyon floor as much as possible. Judging by their jovial mood the pep rally had the desired effect and the canyon was now filled with all sorts of high-fiving, whooping and hollering.

It was then that I took my leave with three lasting impressions. Firstly, some things are best seen alone. Secondly, the Clay Cliffs are well worth a visit. Thirdly, having been to the badlands and feeling a tiny bit rebellious, as I travelled along a deserted gravel road, I chose not to indicate.

I left the Clay Cliffs behind just as the campervan contingent were threatening to break-out a picnic. Grateful that I wasn’t stuck behind an endless procession of campervans while each one worked out how to operate a farm gate while the remaining occupants took 10,000 selfies in front of a sign they clearly hadn’t read.

I checked my watch. I noted the time. Pleased that I still had most of the day ahead of me, I headed for the tiny nook of Evansdale Glen, then later, home. 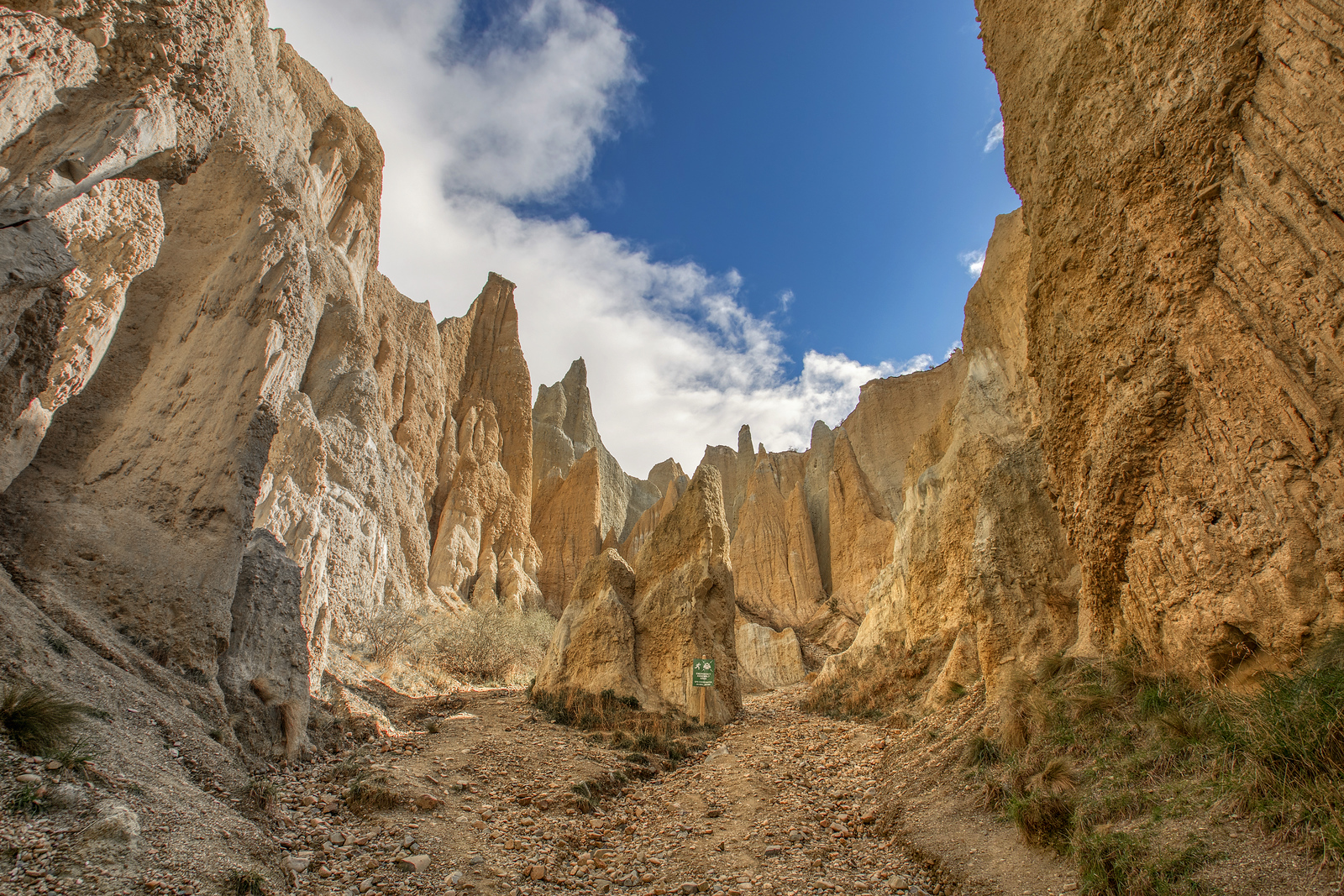 2 thoughts on “The Clay Cliffs Of Omarama”