Leaving the perplexing and somewhat curious yet enjoyable Tekapo Sculpture Walk behind, it was on the way to Cromwell that I came across an equally interesting and intriguing sight. The famous Irishman Creek Station sign. Impressively coming to an abrupt halt on the gravel on the side of the road, I spent the next short while photographing the famous sign location as passing cars whizzed by. For those that aren’t knowledgeable about the history of marine propulsion systems, the Irishman Creek Station was the location where Sir William Hamilton invented his famous jet boat engine. The engine revolutionised the boating world in the 1950’s by allowing boats to skim across the top of the water in the shallow rivers. Which is just what Sir William wanted to be able to do.

All this I was quite unaware of at the time. While I knew the history of Sir William Hamilton, I hadn’t linked the famous invention to the famous Irishman Creek location.

Therein lies another of the wonderful curiosities of Aotearoa. There are small pockets of fascinating history all over the place. Unlike America or Great Britain that would have road signs every 5 km saying, ‘next stop’ birthplace of the Hamilton Jet,”where upon arrival you find a massive parking lot, an overpriced ticketing system and a small museum that made you wonder why you bothered. Attached to which you will also find the compulsary McDonalds or Taco Bell. However, here in Aotearoa, you’ll find nothing of the sort. Just a simple sign saying “Irishman’s Creek.” Thus giving you the understated beauty of travelling in Aotearoa.

With time quickly passing and the road traffic seemingly unhappy at both the location of my car and my tripod, I decided it was best I get to Cromwell and then further on to Clyde.

One of the most joyous and recent developments in Aotearoa (and by recent I mean in the last 20 years) is the creative movement of putting artwork in random places. For instance in Wellington there is a 16-foot sculpture of hand in Civic Square, Christchurch has an aluminium stairway in the middle of a pond and in Tokoroa you will find massive ‘talking’ wooden poles throughout the town. That’s just the start of it, throughout the country there are collections of giant fruit, vegetables and animals from Cape Reinga to Stewart Island. So, when I was at Tekapo, enjoying the peaceful surroundings of a town that was tourist free, it was no surprise to find a collection of giant sculptures.

However, unlike most other town’s that put up objects like giant carrots or gumboots because someone in the area owns a farm, Tekapo had done it rather tastefully. As part of the Mackenzie Book & Art Festival they were holding an open air sculpture exhibition which included an iron globe made out of iron wedges, cast iron birds in an array of colours, blocks of carved stone and a work called Orbit 2 done in Corten Steel.

I was to find out later that the sculpture walk is all part of a create festival celebrating literature, arts, the spectacular Mackenzie landscape and the community who live here. As I was heading to my car, I discovered the next festival is going to be held next in 2023, ‘by then there might even be some tourists around to see it’ I thought to myself. Then, with that thought I head off in the direction of Clyde. 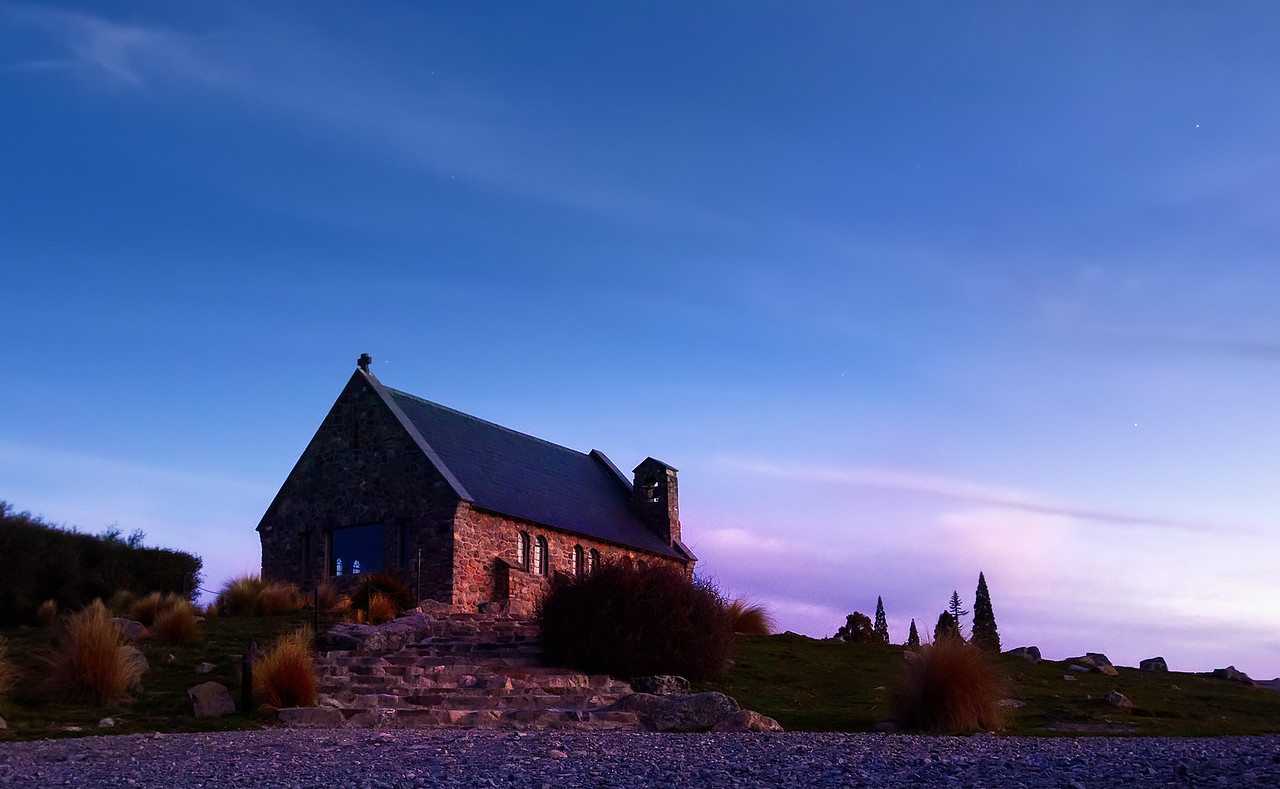 Church Of The Good Shepherd – Buy

I always thought this church was older than it actually is. Built in 1935, I had presumed there was an earlier church on the site that had been rebuilt, however this is not the case. The original sketches were made in 1934 before the church was built in 1935 to commemorate early settlers. When construction started, the builders of the Church were instructed that it must blend into the environment, and that even the Matagouri bushes surrounding the building were to remain.